The evolution of sexual asymmetry

Sexual reproduction evolved only once, but the way by which it occurs is vastly variable. Generally speaking, two haploid genomes come together, go through a diploid phase followed by meiosis to revert to a haploid phase again. One more generality is that the two combining haploids are different in some form. The best known ‘types’ are of course males and females, but even when two hermaphrodites mate – which both are identical – the two cells that actually fuse are very different from each other: male sperm or pollen is small, while the female ovule is much bigger. And even when mating occurs between two cells that seem completely identical, for example in many fungi and algae, the cells differ in at least a handful of uniquely expressed genes. Interestingly, these differ often only in a handful of genes.

Why is asymmetry between the haploids required?

We study the evolution and maintenance of such asymmetries. Mainly using the fission yeast Schizosaccharomyces pombe (the ‘other’ yeast) as a model organisms, we experimentally test hypotheses on these asymmetries, as well as, test the mating system of fission yeast itself. Even though this yeast has been used for many years as a laboratory model, especially to study the eukaryotic cell cycle, little is known about the natural history of the organism itself. What is the role of pheromones during evolution and how strong should asymmetries be?

What maintains the existence of mating types?

Mating types regulate compatibility between haploid cells or individuals. Often a few genes at a single locus regulate this compatibility. Because mating types reduce the chance of a successful mating between two randomly meeting individuals, loss of mating types should in theory be expected to evolve, because that could result in universal compatibility. This strategy evolved many times and in all groups of organisms. In plants, the loss of self-incompatibility is well known, many algae and fungi became homothallic, and mosses have repeated transitions between hermaphroditism and separate sexes. Yeasts have evolved systems to become universally compatible, whilst maintaining mating type functions, called mating-type switching. We use this system to study under which circumstances separate mating types are favored, and when, and how, self-compatibility might evolve, both looking at natural variation, as well as by experimental evolution. 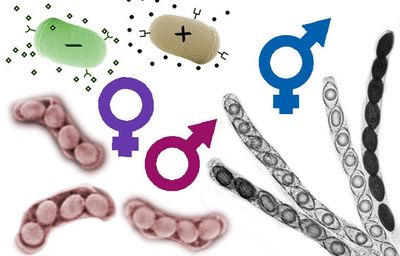 An alternative to becoming compatible with everyone (including self) is to become compatible with more others, but not with self. This strategy did evolve multiple times independently, but is rather restricted to a few groups. This is unexpected, because all theoretical models suggest that increasing the number of mating types should evolve; it increases sexual compatibility, maintains mating types and still avoids self-fertilization with its associated costs. Using natural mating-type variants of basidiomycetes and artificially generated alleles in fission yeast, we test under which circumstances – such as density, ecological stability and heterogeneity – more or fewer mating types might be selected.

Consequences of sexual reproduction on adaptation

Outcrossing can be beneficial because it increases variation for selection to act on, helps avoids Muller’s Ratchet and can brings together beneficial mutations. However, it can affect adaptation. In a collaboration with Simone Immler, Jochen Wolf and Sergio Tusso, we study how gene-flow and sexual reproduction affect adaptation to novel environments in an experimental evolution setup combined with fitness and phenotypic measurements and evolve-and-resequence methods.